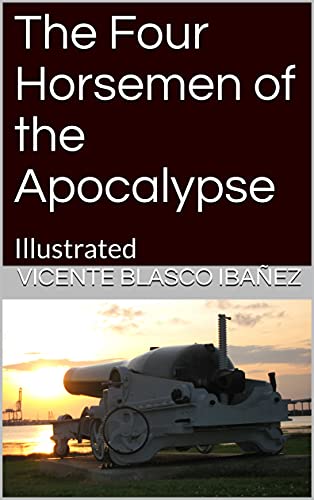 The Four Horsemen of the Apocalypse
The Four Horsemen of The Apocalypse (Spanish: Los cuatro jinetes del Apocalipsis) is a novel by the Spanish author Vicente Blasco Ibáñez, first published in 1916, which tells a tangled tale of the French and German sons-in-law of an Argentinian land-owner who find themselves fighting on opposite sides in the First World War. Its 1918 English translation by Charlotte Brewster Jordan became the best-selling novel in the U.S in 1919 according to Publishers Weekly, who hailed it as "a superbly human story told by a genius". A Frenchman named Marcelo Desnoyers travels to Argentina in 1870, and he marries the elder daughter of Julio Madariaga, the owner of a ranch. Eventually Marcelo, his wife, and his children Julio and Chichi move back to France and live in a mansion in Paris. Julio turns out to be a spoiled, lazy young man who avoids commitments and flirts with a married woman named Marguerite Laurier. Meanwhile, Madariaga’s younger daughter has married a German man named Karl Hartrott, and the Hartrotts move back to Germany. The Desnoyers family and the Hartrott family are thus set against each other with the onset of World War I. However, Julio Desnoyers initially shows no interest in the war, while Hartrott’s family eagerly supports the German cause. It is only after Julio’s lover, Marguerite, lavishes attention upon her husband after the latter is wounded in battle, that Julio is moved to participate in the war. While young Julio Desnoyers serves as a soldier, the aging Marcelo Desnoyers leaves the shelter and returns to his mansion, where he watches the German soldiers advance and eventually plunder his belongings and eat his food. At last the French soldiers push back the German soldiers, and Marcelo chooses to defend a German man who had earlier spared Marcelo’s life.
Vicente Blasco Ibáñez
Vicente Blasco Ibáñez (29 January 1867 – 28 January 1928) was a journalist, politician and best-selling Spanish novelist in various genres whose most widespread and lasting fame in the English-speaking world is from Hollywood films adapted from his works.